This page is for the most memorable (for me) events of the 2022 Winter Olympics.
home 06.02 Ski Jumping - Men's Normal Hill Individual 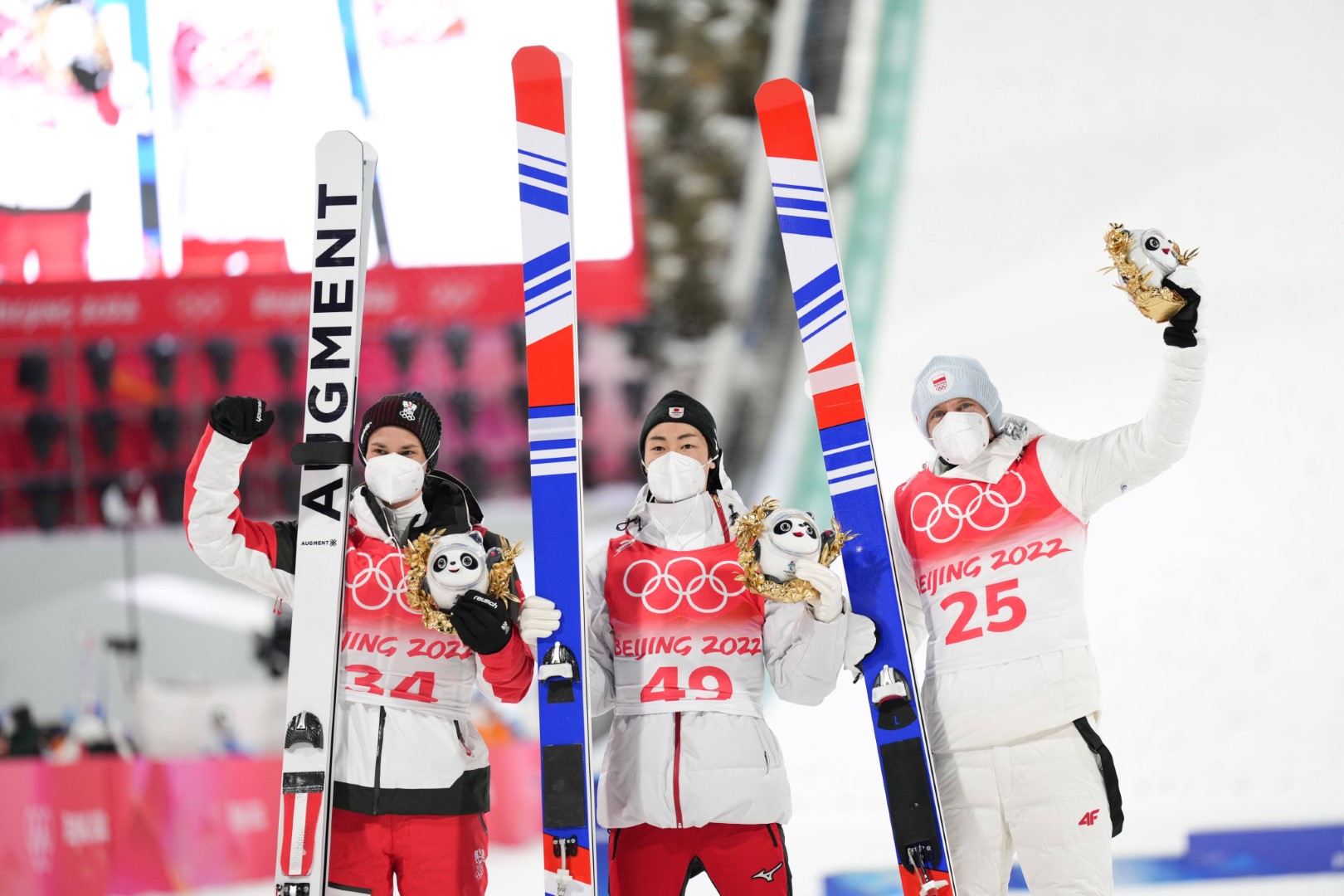 Amazing competition. Wonderful first round by Ryoyu Kobayashi, showing that, despite his relative instability, he didn't win the 4 Hills Tournament just by chance. Incredible result for Manuel Fettner. He had to wait so much and work so hard for this silver medal; I think that this result is even more astounding than Ryoyu's. Great performance by Russians Klimov and Sadreev; both, especially the latter, giving me huge hopes for the future of ski jumping in my country. Good result for Mackenzie Boyd-Clowes - 16th place on the Olympics, just 0.2 points shy of Geiger himself - I bet you didn't expect that! Even though other Austrians weren't as succesful, and Yukiya Sato only finished 32nd and didn't qualify for the second round, I still greatly enjoyed the results. 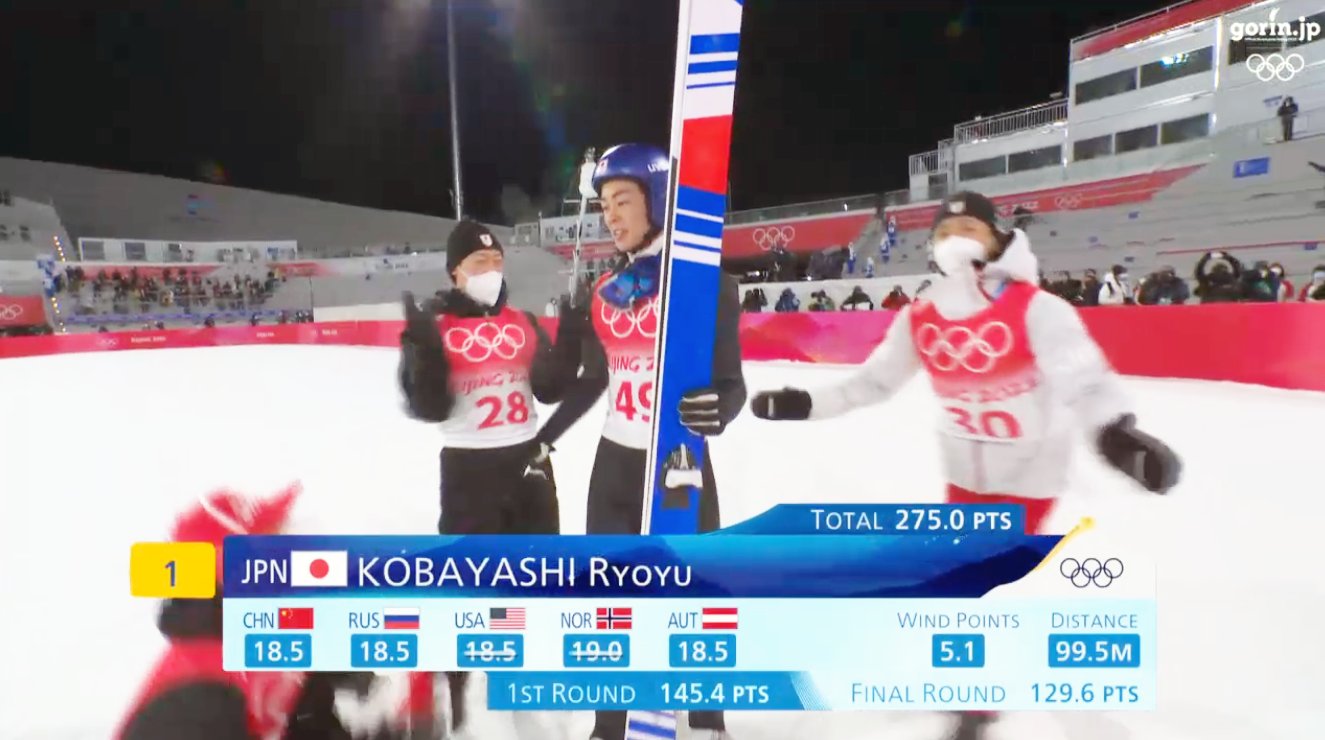 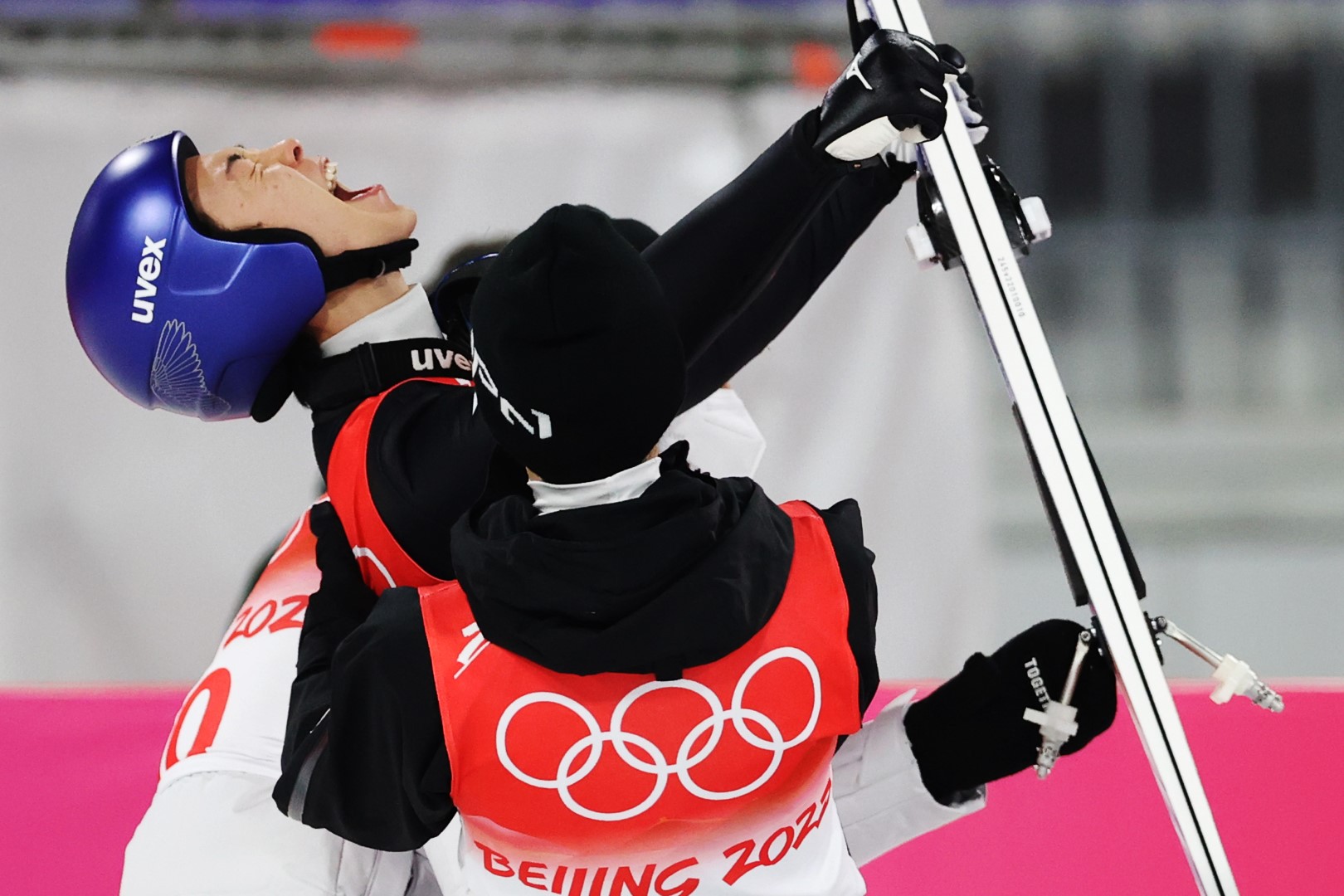 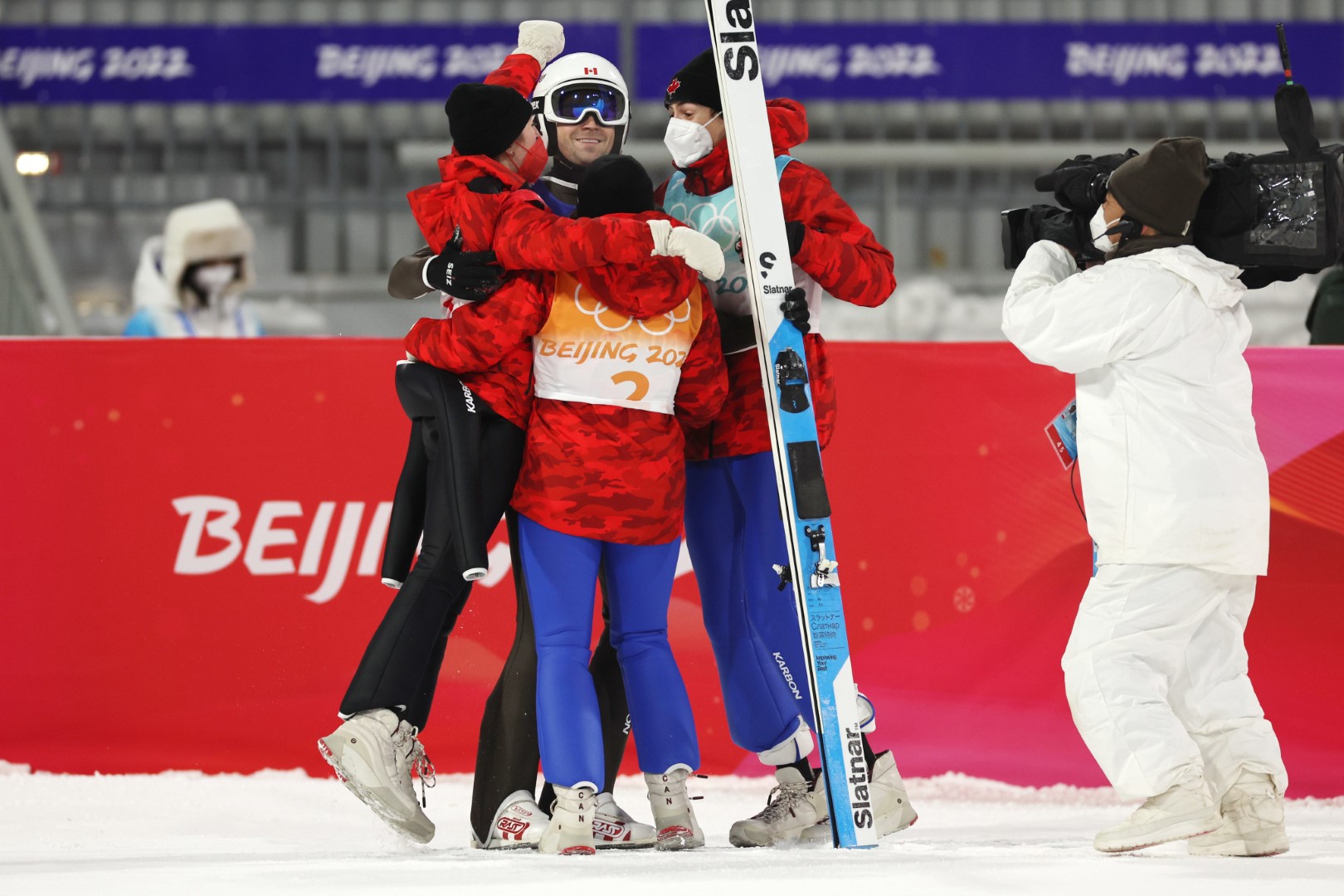 The most memorable competition today was, once again, ski jumping - but I wish there were different reasons for it.
Needless to say, I'm glad for Russia and extremely glad for Canada - I've been, perhaps, Mackenzie's biggest fan in Russia for 7 years! Seeing him with an Olympic medal after all these years is something I couldn't even dream of, and he will forever remain an Olympic medalist. Hopefully this will give ski jumping in Canada a boost it needs.
However, I've been watching ski jumping for as long as I remember living, and I've never seen anything like what happened today before. I just cannot believe that all three disqualified athletes, all of them being professionals supported by dedicated equipment teams, would wear illegal suits to a competition, especially since these were the same suits they wore for the individual competition. I also can't believe that Stroem's suit, which passed the inspection after the first round, suddenly became invalid in the second round.
Seeing Sara Takanashi crying and bowing, and yet delivering a solid second jump after all that happened really broke my heart. I hope that it will not hurt her too bad.
08.02 update - since I watched the event while on work (muted and in a little window in the corner of the screen), I couldn't devote all of myself to watching, so I fell into the trap of being too disappointed by the DSQs to see the good side. CANADA asdaSFWDASGSADFSHYD they DID IT!!! When you see undergdogs you've been rooting for for 7 years getting OLYMPIC MEDALS that's just the best. And Russia had strong chances for bronze even without all the DSQs. They are not responsible for what happened, and they all deserve these medals. I hope it will help spark an interest for ski jumping in both countries. As a little bonus, Peter Prevc will no longer be "That Guy Who Won Everything But The Olympics".
11.02 update - it was hard as HELL since ALL THE DAMN OLYMPIC VIDEOS are region-resticted, but this video of Mackenzie's iconic jump for the ages will be here forever. 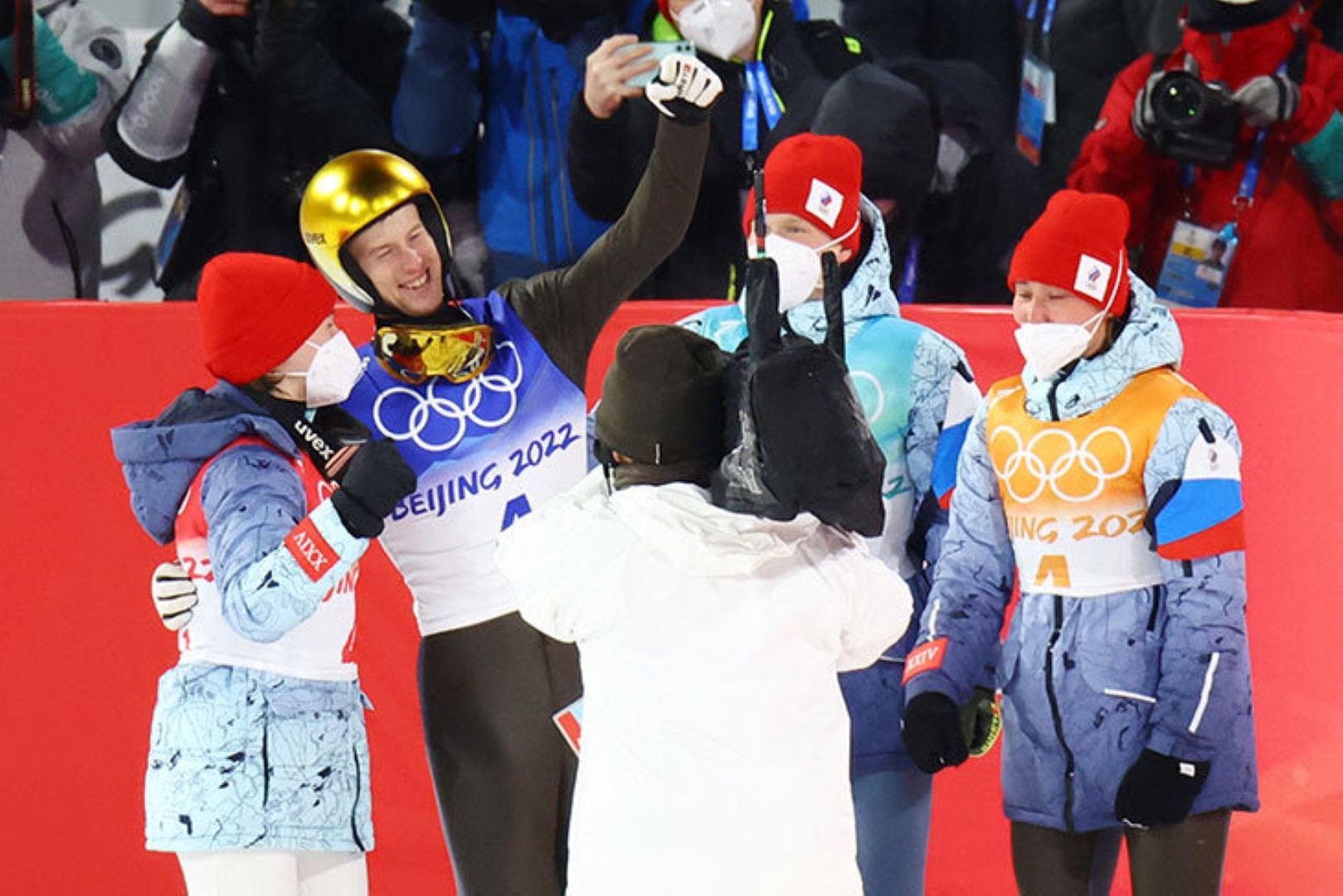 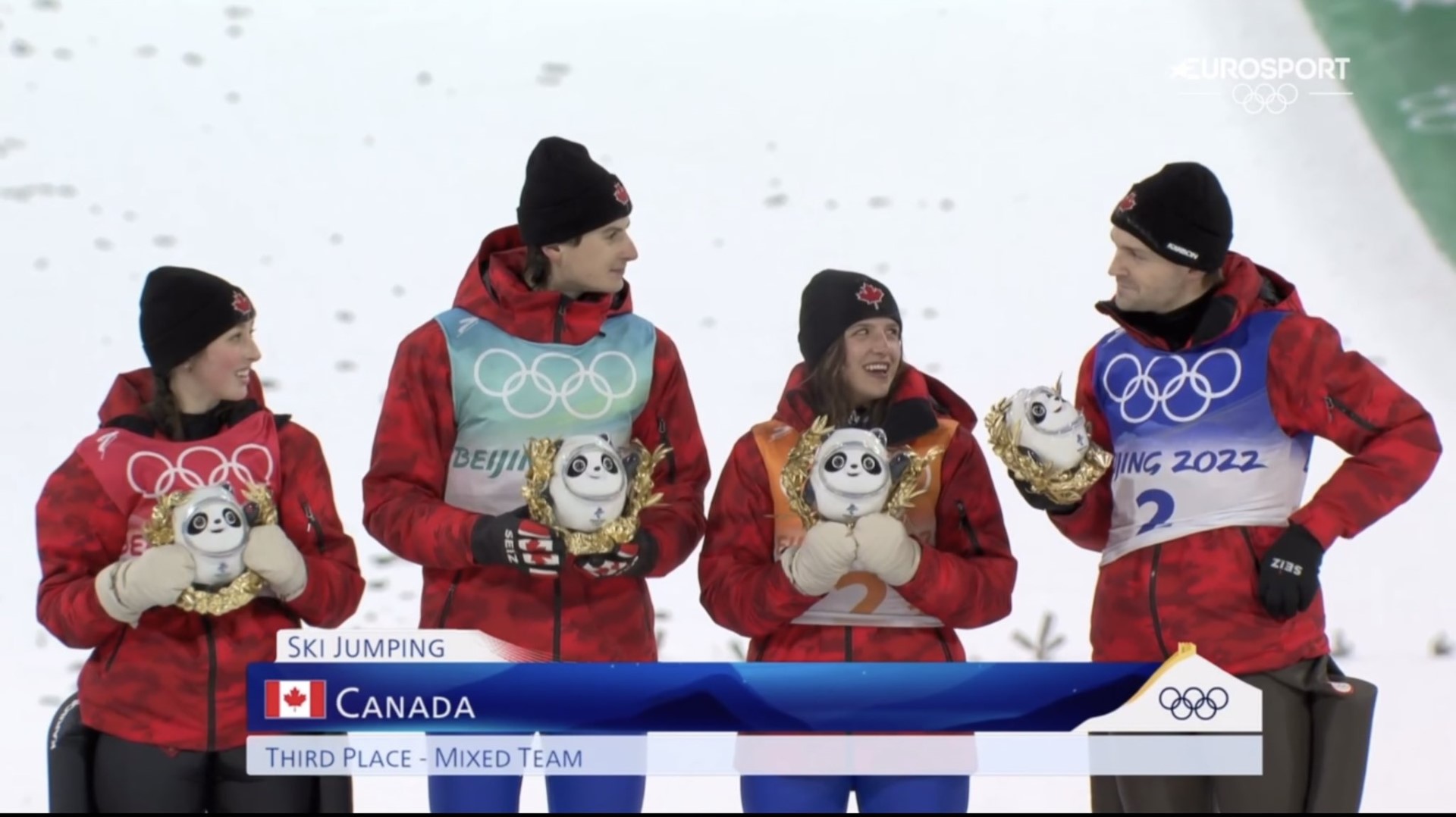 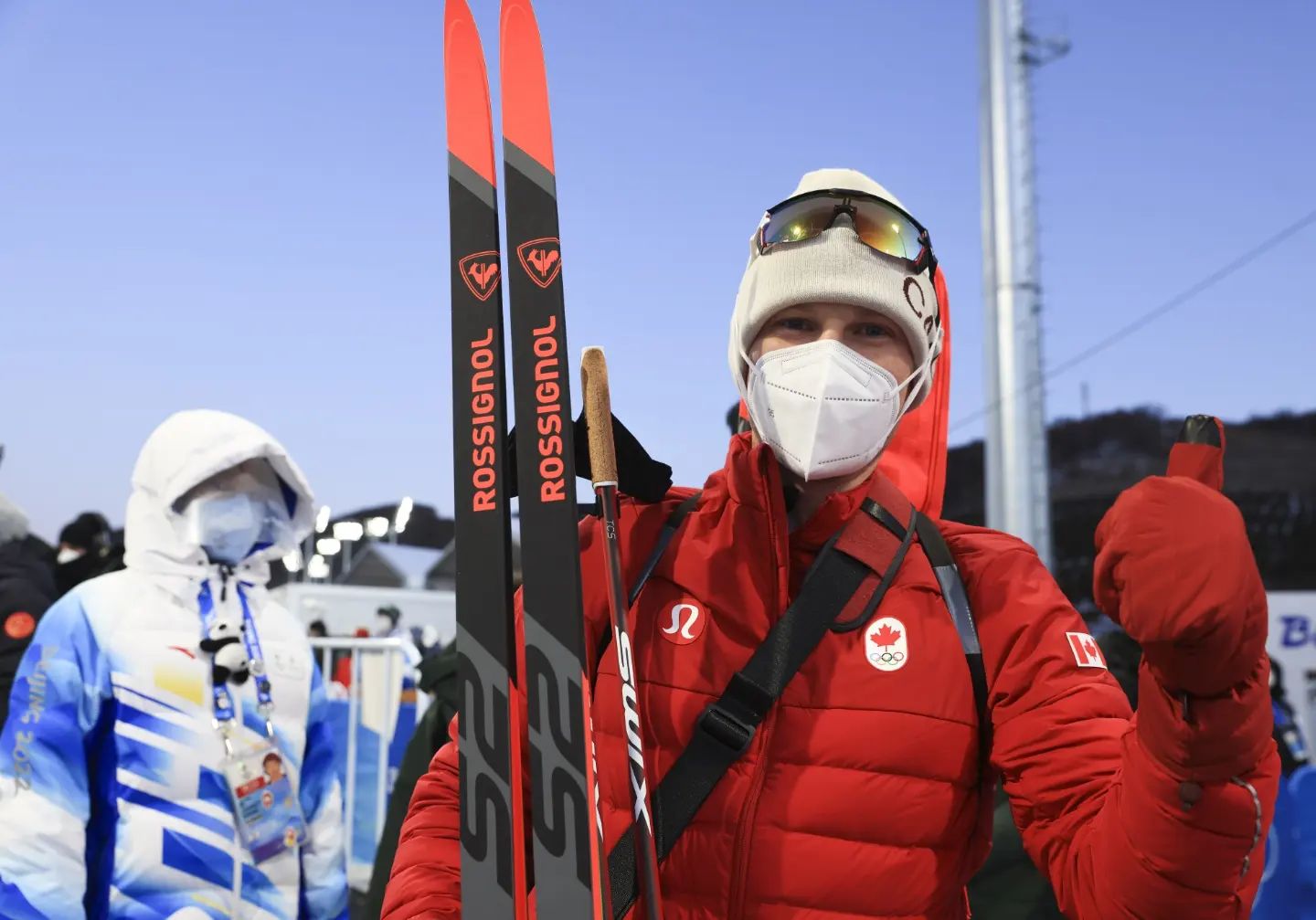 Nothing too big for me today. Scott Gow finished 5th in the individual race - great result, one of the best in Canadian biathlon history. He would've been 2nd if it wasn't for a very disappointing miss in the 2nd shooting. Good result for other maple leaf men, all of them in top 40. Good result for New Zealand's Campbell Wright - 32nd place isn't too bad for your debut Olympics when you're 19 and hail from a country not usually associated with winter sports. Simon Eder did his best, but couldn't show his signature clean shooting, and even if he went all 0s, he still lost too much on the track too.


Nothing too big today. Amazing finish by a German Nordic Combined athlete Vinzenz Geiger; during the last few meters of the ski race he flew like a rocket past all the competition as if they were 3 years old kids who only just learned how to ski. (I can't find the DAMN video anywhere because all of them seem to be region-restricted... *angry noises*) 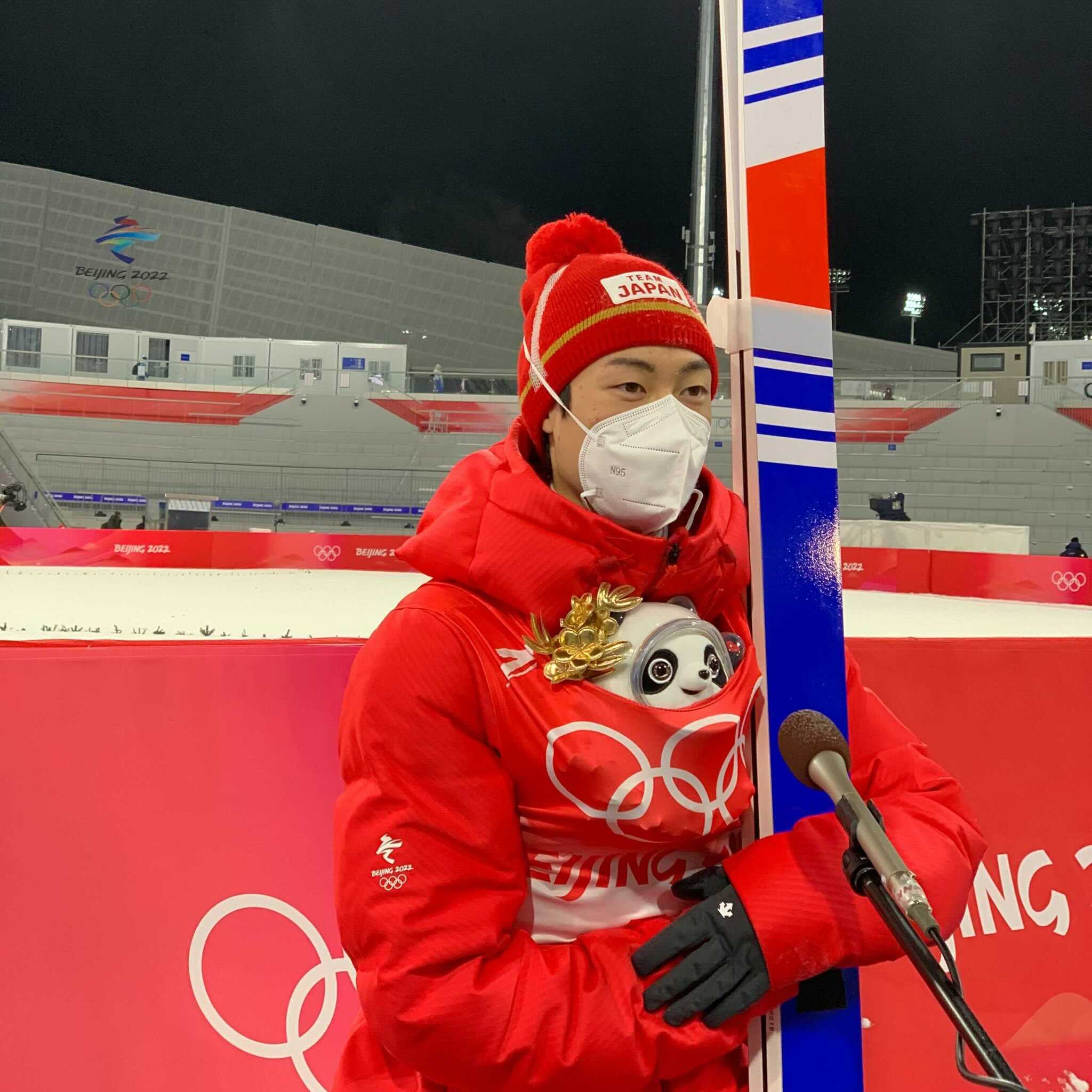 The first round was crazy - I bet it reminded a lot of ski jumping fans why do we love this sport. Perfect weather and little to no interference from the officials led to some beautiful jumps and a high level of competition. Ryoyu managed to set the hill record in the first round - unfortunately it wasn't enough for Noriaki Kasai's favorite subordinate to get his 2nd gold, but he still got a silver and proved that he's indeed the best jumper in the world overall right now. Nakamura and Kobayashi Sr. also showed some strong jumps in the first try, giving me hope for the team competition on 14th. Austrians Fettner and Hoerl had good chances for bronze after the 1st round but unfortunately they couldn't keep up the pace in the 2nd. No second round for Maple Leaf Warriors Soukup & Boyd-Clowes, but they were announced by the commentators as bronze Olympic medalists, and that's what really matters!

A tough victory for the German ice hockey team against China - I hope they'll improve their game in the playoffs. 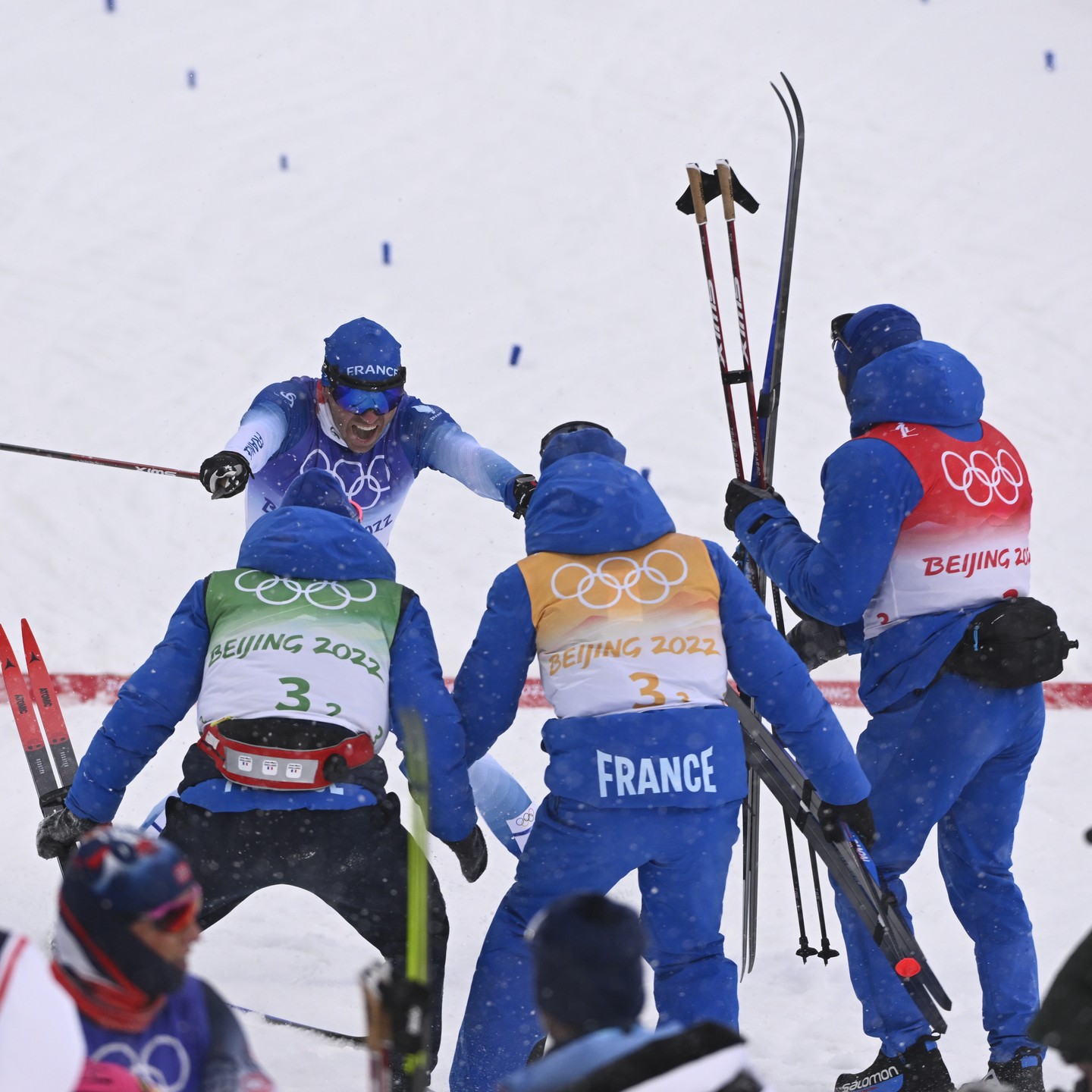 It made me really glad seeing the French cross-country skiing team celebrating their bronze medal in the 40 km relay as if it was gold.

Not a bad performance from Germany in ice hockey today, but unfortunately it wasn't enough. I hope they can improve their game even further before the playoffs game against Slovakia. 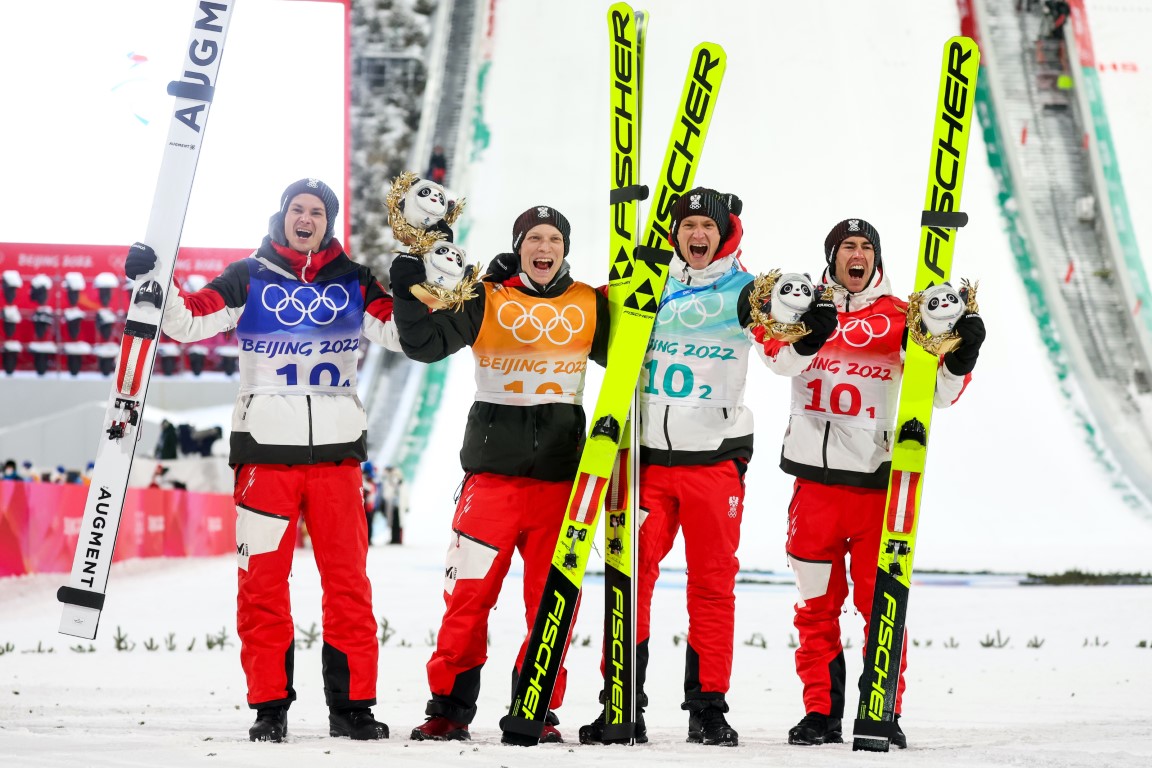 AUSTRIA AUSTRIA AUSTRIA!!! Amazing performance by the team, Hoerl is a god, Fettner didn't dissapoint when he had to make the jump of his life, and Kraft and Huber both had solid jumps. Think about it - by the beginning of the season Fettner competed in the Continental Cup with near-zero chances of even making it into the Olympic team, considering how many great jumpers Austria has, and now, at the age of 36, he brought home two Olympic medals. Well deserved win that made me extremely glad. I was sure that Slovenia will crush the other teams as if they weren't there; I'm glad I was wrong. Sadly, no medals on this Olympics for Yukiya Sato (this was the last ski jumping event), and I'm not sure if he'll get a chance in 2026; he did a good job today though, considering the wind conditions. And if today was an individual event, then Ryoyu would've been the winner - that's good too. 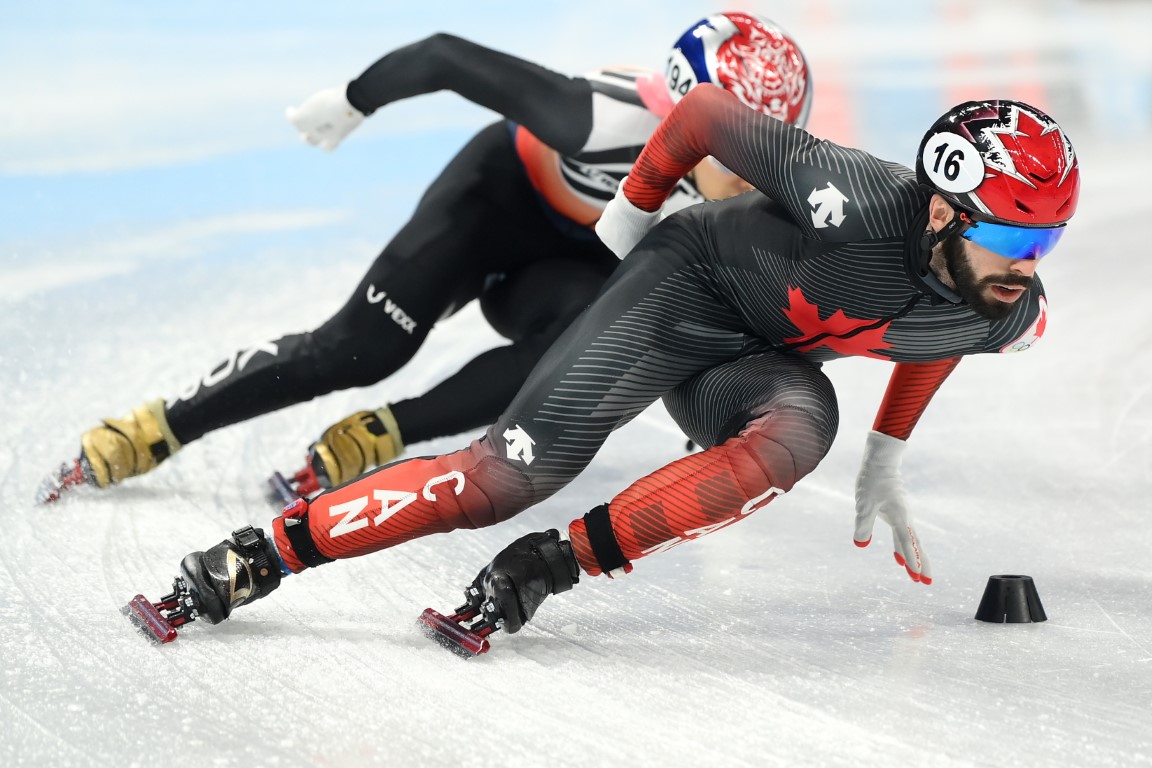 Amazing performance by the Canadian short track team (all the 5 guys are from Quebec!!!

) today. They didn't seem to run as fast as the Koreans, but every exchange only widened the gap between the teams. Short track has been really fun to watch; I've taken quite a liking to this sport - too bad I kinda missed out on it during the previous Olympics'.
Both Canada and Germany are sadly already out of the hockey tournament. I have no other option but to root for Slovakia now.


Great semifinal games with splendid performance by all teams. USA skip Shuster's decision to deliberately enter the 10th end while trailing by 2 stones wasn't too wise, I think. As for Canada, a rather unfortunate loss. The last end could definitely end with Canada taking 2 stones and winning the game, but Edin's shot was perfect, as always.
I actually used to play curling for a few years (without any noticeable success though ＼(ﾟｰﾟ＼)), so watching the competitions is always interesting for me.


One thing that makes me sad about Canadian biathletes is that they don't usuall fail in the beginning of the race - they make it all the way to the last shooting and only then they screw up. Same thing happened today to Christian Gow. Well, at least three Canadians made it into the mass start today, which never happened before.
Sergey Ridzik, Russian ski cross athlete won a bronze medal today in a very tough race; he's also got bronze in 2018. After the race, he gave an interview; it was so bright, so simple and so kind that I can't help but smile and cry with him every time I rewatch it. You probably don't speak Russian, but please watch it anyway.

Here's a rough translation: "Can I say a few "hello"'s? Vladimir Ivanovich Shein, my first coach, my darling! Happy birthday! That's my gift to you! That's for Vladimir Ivanovich... Yeah, my first coach from all the way back when I was doing alpine skiing has a birthday today. And now, for my wife, my dear, lovely woman, my beauty... Natasha... *long pause during which Sergey cries and turns away* Woah! My love, I was third today. Uhh! Sorry for... *another pause* Huuh, it's so hard to say anything right now... Uhh, huhh... My love, sorry that I wasn't there when our daughter was born, but our Mira (the name of the daughter), she will know that her daddy made history today! For the second time, yeah, I couldn't win the gold medal, but the bronze... is even better! Thank you, everyone! Mom, you can be proud of your son again."
Definitely one of the best Olympic moments for me.
As a little bonus, the Italian ski cross athlete Simone Deromedis made a little silly trick just before the "Small Final" finish.
19.02 Men's Ice Hockey - Bronze medal game 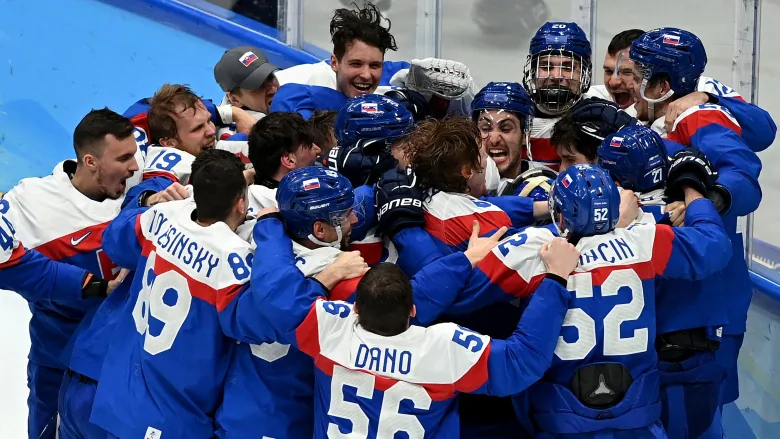 Nice job by Slovakia earning their first ever medals in hockey - they certainly deserved it. It's just the best when undergdogs win medals; and with the state of ice hockey in Slovakia these days, I hope it will inspire more young players to try the sport. Sweden didn't have the motivation nor energy today. Just like with the amazing historical Germany's second place in 2018, the absence of NHL players gave a chance for the smaller teams. 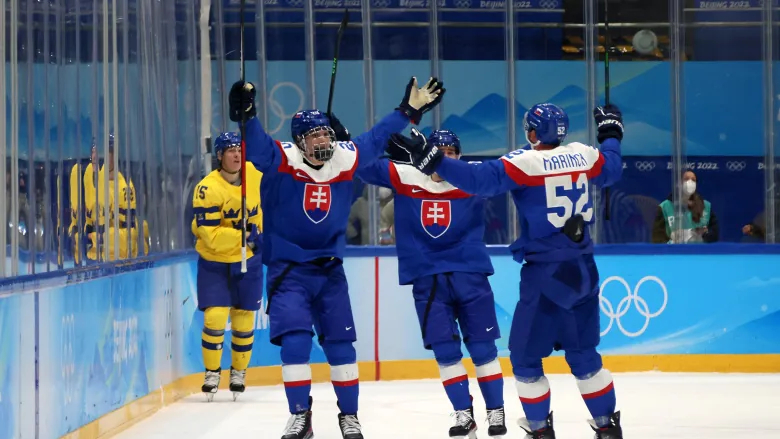