21:55 I kinda missed it, but yesterday was my 1st Neocities anniversary! I discovered Neocities through itazuraneko; at some point I got curious and visited neocities.org. I didn't want to try creating my own website here at first, thinking that this sparkle will only last for a few days and then I'll move on to something else, yet here we are now.


A pre-redesign vesion of my website that I've preserved on my PC. 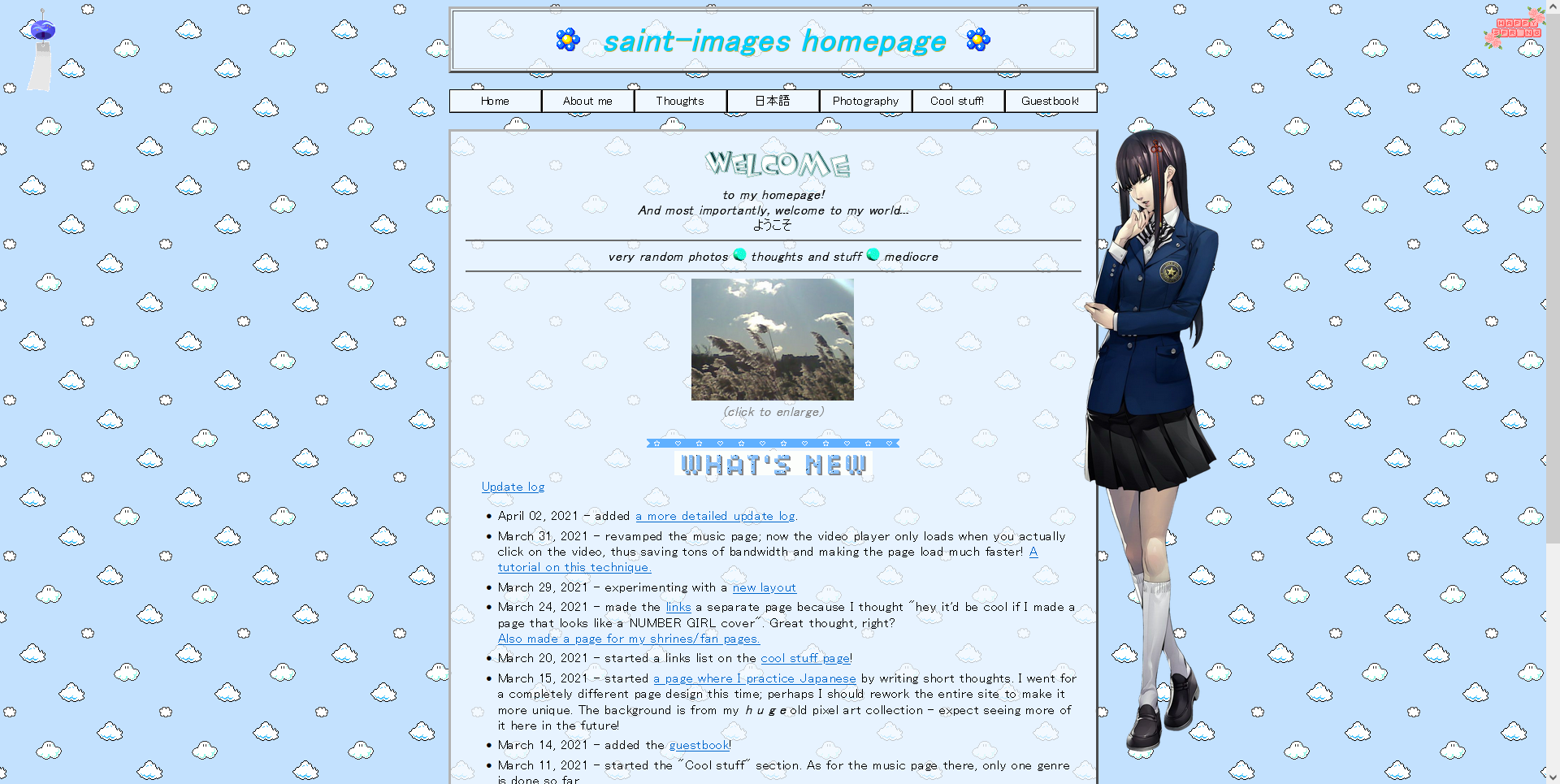 It was kinda influenced by the "90s gifs flashy stuff brooo gifcities!!!"; luckily, I quickly figured out that it's not what personal web is about. As you can see, some elements still carried over.

The first major redesign, as saved by web archive. 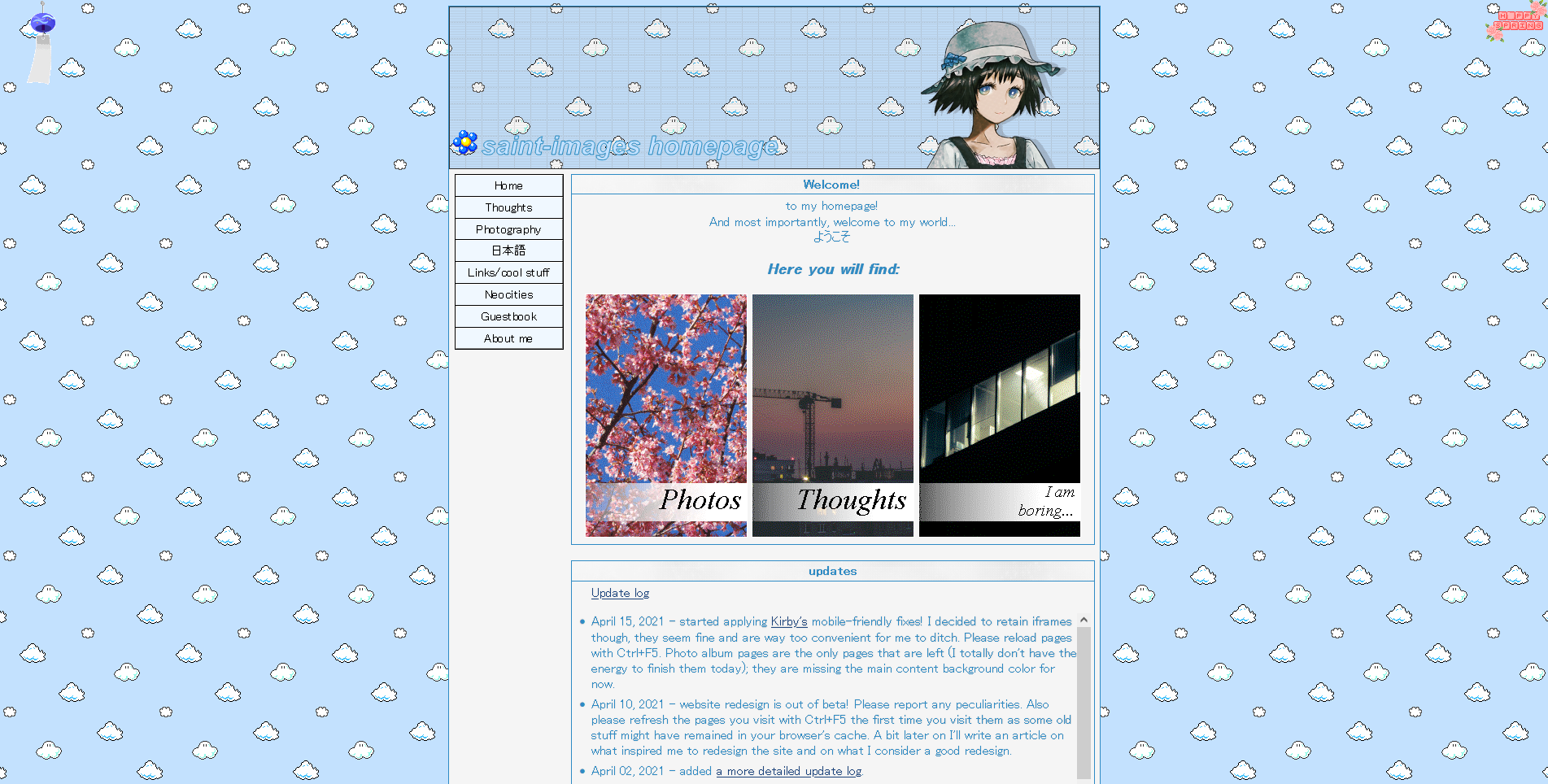 As you can see, it is much closer to the current design, although now, there's only so much left from the original layout I found.

On Neocities, I've discovered a lot of wonderful people. It's the only place, both online and IRL, where I can really vent and ramble on anything. It's the only place where I can express myself (or what's left of my "personality", anyway). I find it amazing how unlike social media, which is always biased and aggressive, here you can find 2 websites with completely opposite opinions on anything, yet nobody is censoring or bashing anyone and everyone is still friendly. I hope it all stays this way.

20:49 Last 4 days have been afwul; I guess you can understand why. I haven't been able to concentrate on anything and I'm still at loss of words. Lots of words have been said and lots of people died. I, as an (unfortunate) citized of the aggressor's country did all I could to help stop the war and help the people of Ukraine, but there's only so much one can do. Sorry. I'm just, absolutely devastated. I hope you understand.

22:13 I think I should write a little note here about the way I post-process my photos and why I do it like that.

17:13 While listening to dad's tapes, I found one that contains a recording from the early 70s where he reads children poems with his late mother. It was initially recorded on a big bobbin and then dad re-recorded it on a tape; now I bought a minijack-minijack cable and recorded it on PC. Sadly, the quality is bad; I used some software to reduce the noise, but the voices are still barely recognizable. I don't think it can be repaired further; still, that's something and I'm glad that I could save such a family artifact.

22:46 Completed Ridge Racer Type 4 today; it's a really fun and stylish game. I also didn't expect it to have any kind of lore, but all the four teams have a story that unfolds as you progress through the races; some of them are interconnected. Playing it made me think that perhaps if I played more of such good stylish games as a child, I would've grown up as someone who actually has any taste or imagination.

It's been quite stormy lately.

I think I'm losing the last traces of my abilities to hold any meaningful conversations with people.

22:17 Been working from home for the past 2 weeks; this means 0 productivity but an opportunity to go out to more places during lunch breaks. Today I brought some lunch for my cousin who's on an internship in a toy store. 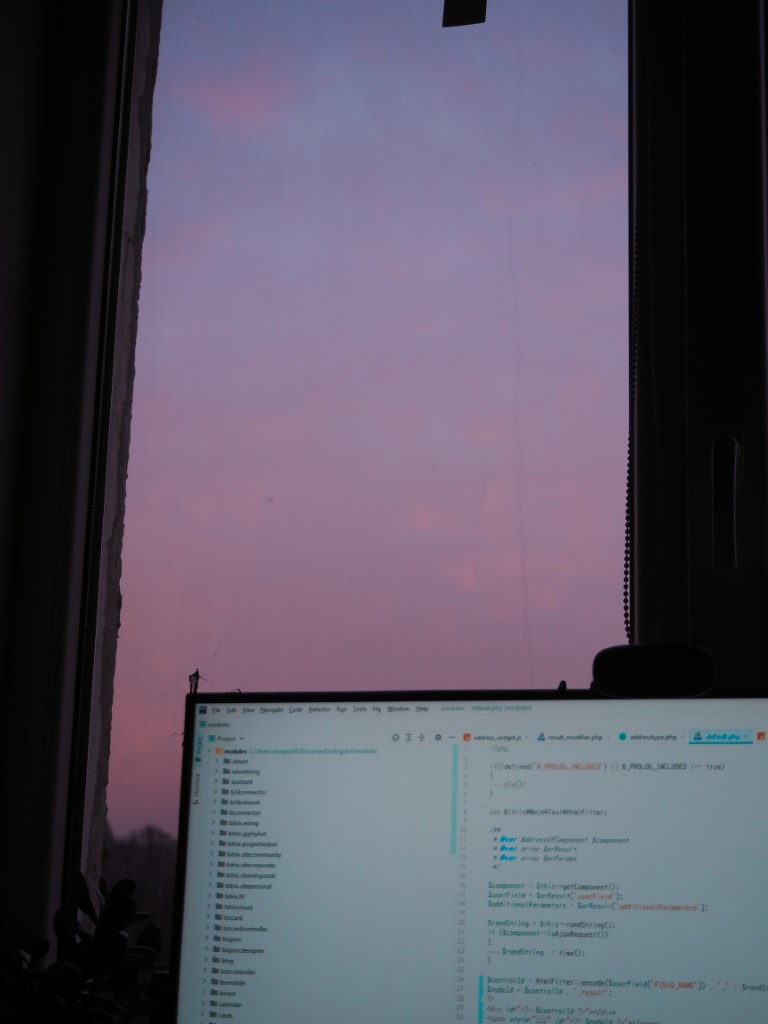 Some stuff arrived today; a decorative license plate (planning on getting more of those from other countries) and a 2015 issue of Option. 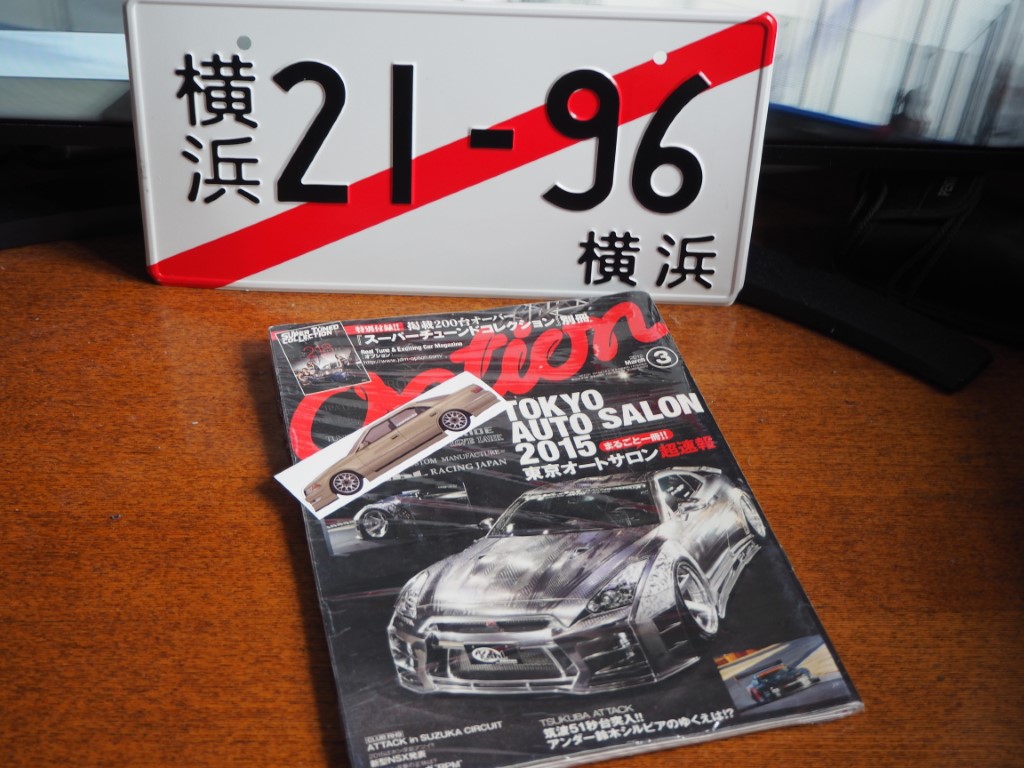 18:47 Completed Yakuza 0 on Friday night (he-he). It's a great game with a strong plot, strong characters and nice gameplay for a fighting game. Every character got his share of ups and downs; some of them got what they deserve, and some got a really unfair treatment (my point here being that the plot isn't just "good guys win, bad guys lose"; and honestly there aren't truly "good" or "bad" guys there). I've heard opinions that the Yakuza series peaked with 0, and that a lot of people get disappointed with Yakuza 1 when 0 was their first game; still, I will play Yakuza 1 and the later games.
My childhood friend, the only friend I've got left who I actually hang out with IRL, is leaving for 6 months on 15th. His dad basically forced him into being a electromechanic on a semi-military ship (something about being a supply and maintenance ship, I think), and they're sailing for Syria. I'm really scared that something will happen to him because Syria is dangerous and their ship isn't exactly a cruise liner. God help them. 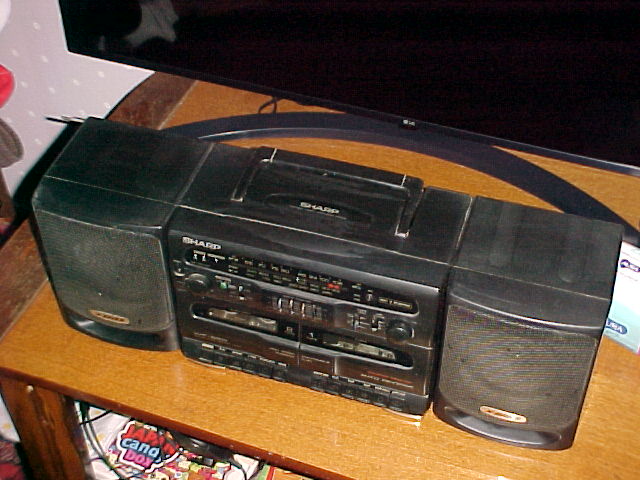 I dug out our old radio & cassette tape player that I remember for as long as I remember living. Now I can finally listen to the "In Office" tape I ordered a while ago, as well as dad's old tapes. All great bands like dad's favorite Electric Light Orchestra. Of course, I can listen to any of this music online, but listening to my old man's tapes actually feels... meaningful? I have very fond memories of dancing to some of these tapes with him when we moved into our current apartment (meaning I was 5 at the time). I always cry when I think of childhood, and this time's not an exception.

18:30 Really glad to see Nintendo Switch Sports announced on the last Direct; in my opinion this one should've been one of the launch titles for the Switch. I have great memories of playing Wii Sports in the Netherlands with my family in 2008; with my dad being especially interested in the game. Tennis was massively fun.
I have recently been recommended to play Chrono Cross by disc-content; even though they have announced the remaster, I think I'll still try the original game.

17:59 Fell sick last Thursday; been working from home since Friday. Feeling good now, but still haven't fully recovered. As I mentioned before, I don't really like working from home, but this time it's ok since it gives me an opportunity to follow the Olympics more closely.

Gran Turismo 7 releases in early March; I have huge hopes for this game and I think I will buy a PS4 just to play it.

The days are still awfully gray, but at least this morning the sky played pink for a bit. Thanks to my new camera's RAW capabilities, the photos can look nice even after all my Dumb Post Processing! 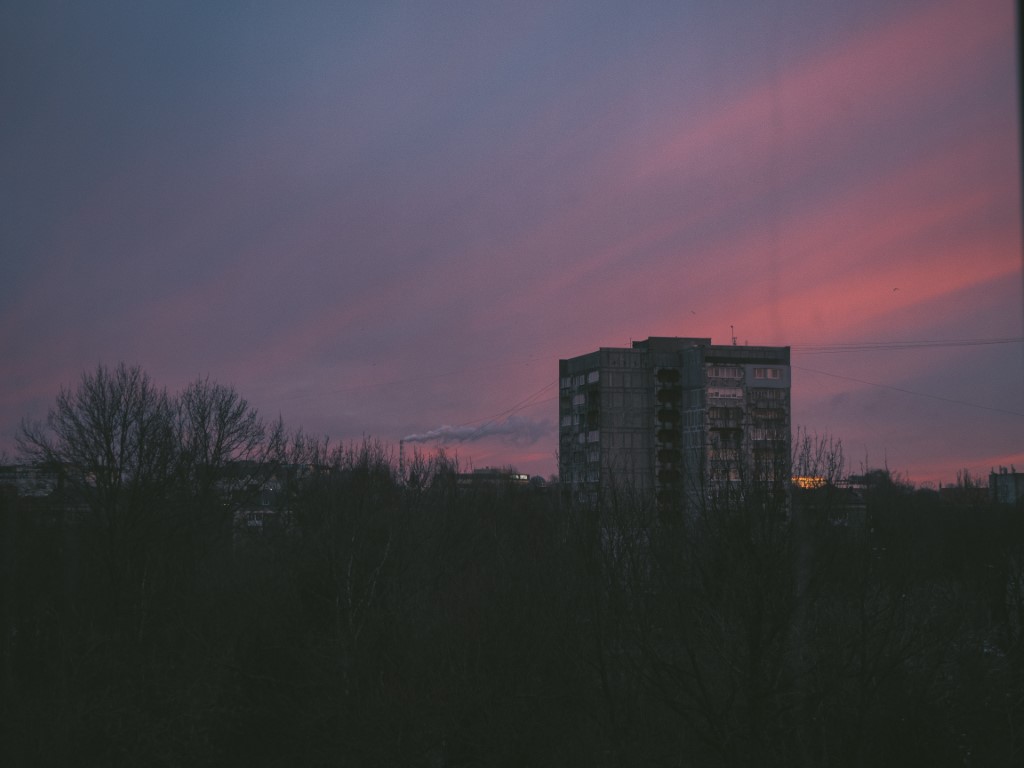